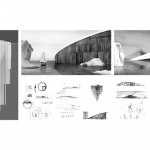 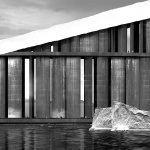 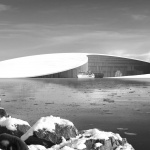 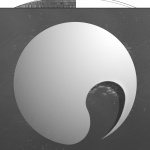 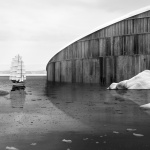 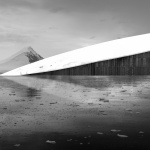 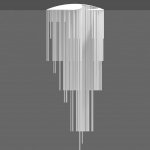 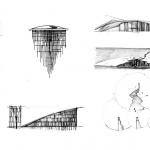 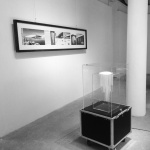 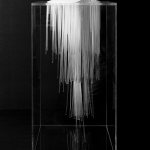 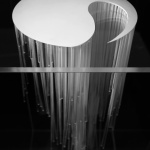 The imaginary man-made floating island takes the shape of a giant lens, cloaked in a snow-and-ice armor, 2130 meters across and rising 213 meters above water. An entry bay the shape of a yin sign is cut into the island’s body, its walls made of rows upon rows of rotating metal semispheres. They change the image and the character of the facade depending on the situation: accept or close up, let in or reject.

Antarctica’s Satellite is not a real project. It’s pure form, a metaphor of perfect communication. Line, form, material and size all interact with the surroundings. Anything is possible: joint action or passive surveillance, harmony or conflict, dialog or solitude.
The creation of utopias, the efforts of plunging ideal models into the experimental environment of reality, are most active at the break of historical paradigms. They come from a frustration with obsolete languages of communication which fail to describe emerging worldviews. Going back to the ideal form is like appealing to truth.
Captain Nemo’s Nautilus, Swift’s Laputa, Verne’s Standard-Island all had their own architectures, as well as stories, legends, constructions and technologies. And one common idea: that of a leap beyond the everyday, the act of creating a parallel ideal universe.

The form suggested in this case leads us away from a discussion of its nature and relevance. It is obvious and convincing as nature itself. Its size, shape and material make it a necessary part of the landscape. Its essence and content are only shown in the ‘yin’ bay – the bay of Communication, which unveils its man-made origin. The architecture of this bay, cut with geometric precision into the body of the ice-and-snow island, compacts all the features and shortcomings of a millenium of architecture’s evolution.

The deliberate contrast between the free and pure form, the shape and size to match Antarctica’s landscape, and on the other hand its imperfect, man-made, human-sized contents, builds the image of this iceberg/island, a metaphor of nomadic life in an era of perplexity.

Whether the Satellite is an Antarctic research center, a new-generation entertainment cruise ship, a top-security prison, an invading country’s military base or a new UN HQ floating around the iced continent – is outside the scope of this artistic statement. It’s just an image and a life form in the fantastic, alien world of Antarctica here on Earth.

Another attempt at interaction.